A Tentative Victory Against Knotweed

It has been slow going, but we have made some serious progress on the knotweed front. Mike's mom Kiki and I have toiled away on the large patch on the West side of our house. Yesterday Mike helped me finish the job and we removed all visible evidence of the plant (on the western front, that is - there's still an alarming patch by the front door). I'm sure that there is more lurking under the surface, but we'll never know when it's really eradicated so we celebrate where we can. I am also reading lots of information about knotweed, including the very thorough King County Knotweed Eradication Booklet (thanks Chris!). I now know "the four T's": timely, tenacious, tough and thorough. They're attributes we should demonstrate in order to vanquish this invasive weed, but they quite aptly describe the knotweed itself. This plant is a voracious reproducer and has no problem growing from seed pods, creepy red-orange nodules, or root fragments.  Definitely something to treat with care. We've been bagging it and taking it to the dump. There's no way we captured every last piece of it, and we'll have to start looking for new sprouts in the next weeks while we tackle the snarl at the front of the house. Is it possible that someone purposely planted this (almost certainly the case)? I shudder to think of it.

We haven't just been pulling things out of the ground.  We've just planted a row of fruit trees in the yard, something that will one day make a small orchard to include the two we've already got there.  Now in addition to the pear and Italian prune, we'll have two apples, an apricot, a sour cherry and a rainier, and a second pear tree.  Orchard!  I can't wait! And it looks like we might even get some blossoms on the sour cherry this season.  The saplings are about as tall as we are, and most of them will be 10-15 feet when they're full grown, but that new pear is going to reach 20-30 feet!  I wonder how long that will take.

In somewhat more distressing news, we have learned an interesting feature about our sewer lateral.  Our plumber sent a camera down there last week, and marked its route through the yard in green.

It heads straight to one of the trees our town (I assume) planted along the length of our block on the median.  The camera couldn't get past that point, and at only 3 feet down the roots are almost certainly the culprit.  It's an ominous sign, but we're finding hope as we learn how to work with the city.  They'll be digging up the entire street to replace the main sewer line in June, and that should coincide nicely with whatever attempts we have to make to fix things on our end (though it's still not clear on whose end the problem sits).  Hmm...the possibilities.


And I wish we had some photographic evidence for this story, but we were too enchanted to even think to grab the camera.  When Kiki, Mike and I were at the house on Monday taking our lunch break, we looked up and saw a bald eagle(!) cruising by, slowly, maybe a hundred feet up.  It was so close!  And just coasting leisurely overhead.  It must have been looking for some lunch of its own.  But the chickens!  We'll have to be careful and build a coop with wire mesh over the run, or giving the hens plenty of thorny bushes to hide in (Ann says that they feel safe when they're in among the thorns).  I'm sure that eagle wouldn't think twice about grabbing any of our ladies for a lunchtime snack.  Yikes! 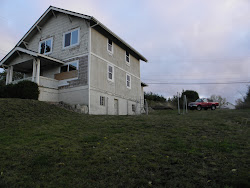 MIke and Ann attempt to transform a neglected turn of the century home into something amazing.